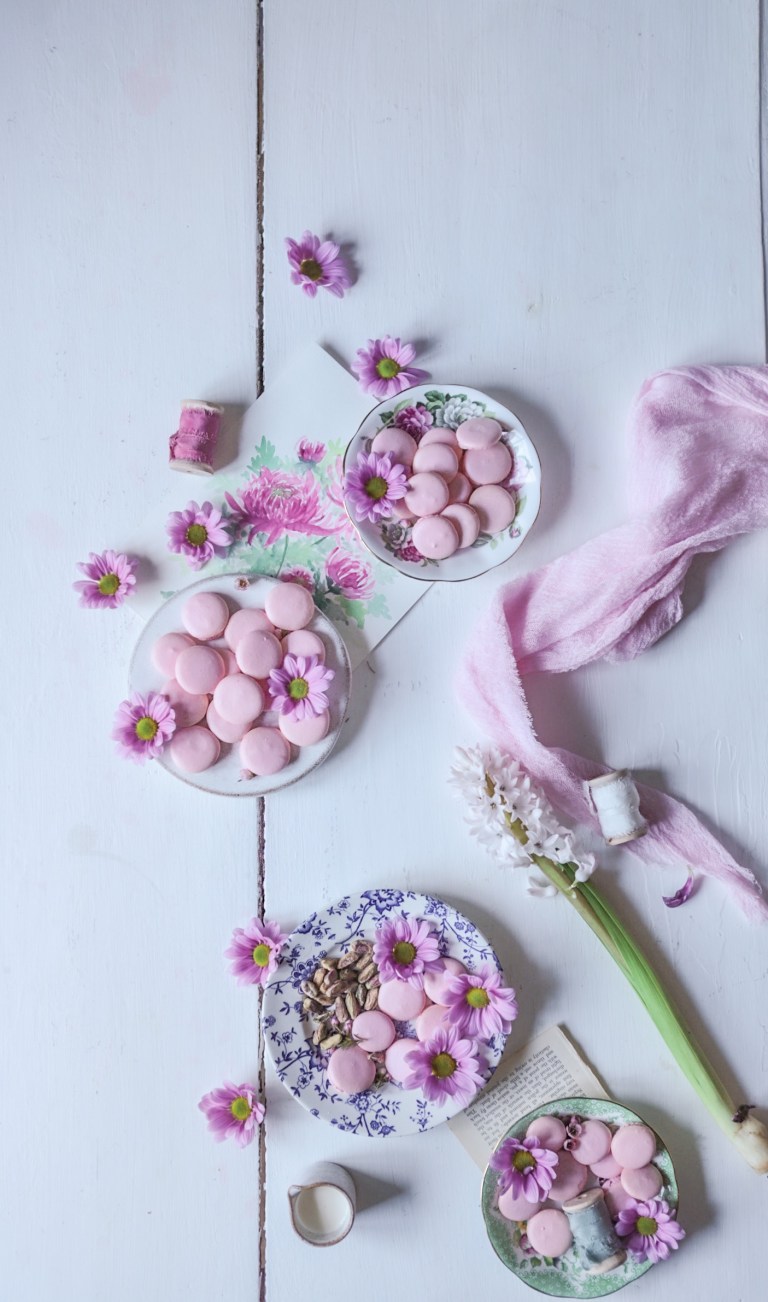 Does the world really need another macaron recipe …?

Seeing that you are reading this easy macarons recipe, I guess, I have decided that world does need another macaron recipe!

It took me about half a dozen attempts to make my first good batch of macarons. I made copious notes during each attempt which helped me fine tune the ingredient ratio and process steps. The trickiest was to get the oven temperature such that the macarons were neither underbaked or over cooked. Macarons are super sensitive to temperature and even a minor variation can make a difference between a great macaron and bad one.

The other two tricky things are making the meringue and “macaronage”. Meringue can easy to make if you follow the steps carefully but macaronage is more difficult to get right. The macaronage is the process of deflating the meringue by mixing in almond flour and powdered sugar. I have included detailed steps for making meringue, macaronage and getting the temperature right.

However, if this is your first attempt at making macarons, you will have to give it couple fo tries to get it right. Make sure to note down the steps in detail so that you can try different variations.

I have tried to make the recipe for macarons as easy and detailed as possible. I hope you will give this easy macaron recipe a try!

Tips on meringue To make a good meringue, it’s really important that any of the utensils used in making meringue don’t have any fat on them. Before starting on a meringure, I wipe all the bowls, mixer blades with lemon juice to remove fat completely. Dry the bowls before starting on the meringue If you are separating the egg whites and yolk, make sure that the egg whites don’t have even a spot of yolk. The fat in the yolk can destabilise the meringue Macaronage It’s important not to over or under beat the mixture. If you beat it too long, the mixture will be too liquid to pipe properly and if’ it’s underbeaten, it will have too much air  and will develop very very large feet once baked. It’s important to do the figure eight test at regular intervals and stop as soon as you can form the figure eigth without breaking the batter
Humidity and temperature Macarons are very sensitive to both humidity and temperature. I had to do a number of trials with my oven before I could get the right temperature setting. My oven has a grill on the top so it’s always cooks the macaron on top first and as a result, the bottom of the macarons didn’t bake fully. If I baked for longer, it burned the top even after  I covered the top with parchment paper!  To get around this,  I had to get creative! So as soon as the macarons developed feet (around 3minutes into baking), I  stuck a wooden spatula at the top of the oven door to keep it open. This released the heat from the top while the bottom of the macaron kept cooking. I also preheated the metal baking sheet so  that the bottom of the macarons were set on a heated sheet which helped bake the bottoms Using the parchment paper (baking sheet) rather than a silicone mat  helped with better heat transfer to the bottom Do not pipe directly on a metal sheet as it doesn’t allow the macarons to expand properly.
Tried this recipe?Mention @Incredible.kitchen or tag #myincrediblekitchen!