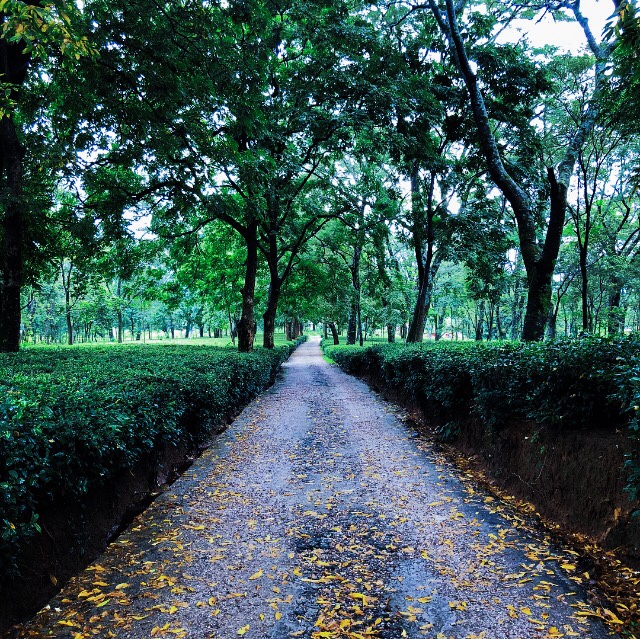 Is your love as lush as mine?

Himachal Pradesh, unlike any other part of  part of the Himalayan India, is intimately entwined with the lore of the mighty Himalayas. To think of Himalayas is to think of Himachal. I have been to Himachal few times as a kid and have faint memories of lush green mountains, the busy boulevards of Shimla, the summer capital of the British, and our bus making sharp turns while barely clinging to the hairline roads snaking around the high mountains. However, this time, my mother’s fond memories of the mountains brought us to Himachal Pradesh. She spent a large part of her childhood in Kangra valley in Himachal as her dad was a headmaster of a local school in the village of Kotla Behal. We grew up listening her reminisce about her childhood in Kangra: traipsing over dales and hills to go see friends as there were no roads and the nearest bus stop was one-day walk away and eating the delicious Himachali food that their cook, ‘Pandit ji’ as he was called respectfully, made: mahni, bhat, dham, khicdi, makki roti….

When we planned the trip, we weren’t necessarily trying to recreate my mother’s childhood but we wanted to find a little haven of peace and tranquility to capture the essence of Kangra of my mother’s childhood. Much has changed since she was a young girl, now buses ply most of the villages and Himachali cities, like everywhere else in India, have become polluted and crowded but where there is will, there is a way.

‘The Lodge at Wah’, about 10 kilometers from Palampur, in the village of Deogra, is a small, luxurious retreat attached to a 536 acre lush-green tea estate. The British established the tea estate in 1857 and the current owners had it in their family for four generations. The Kangra tea at the time was considered one of the best teas in the world but after a major earth quake in 1905 which caused substantial destruction, the tea production never recovered. However there are efforts afoot to revive the Kangra tea. 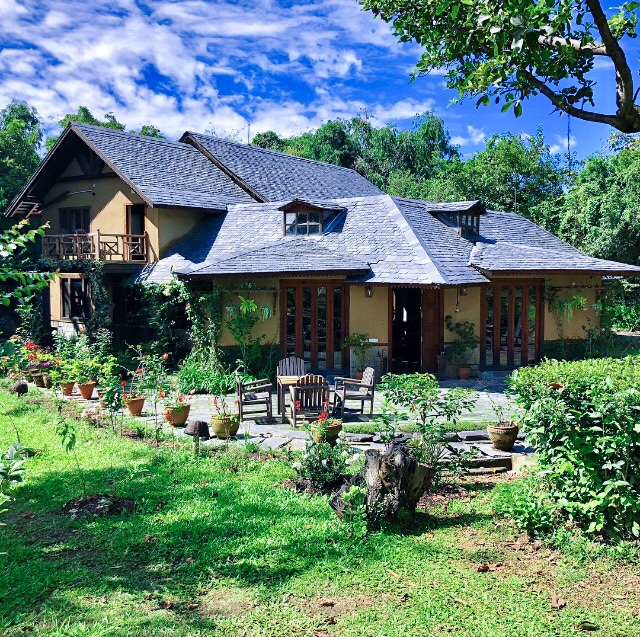 While the tea gardens was what first attracted me to the property, it was the lodge itself that left a lasting impression on us.

The lodge has been built using traditional Himachali construction techniques while keeping in mind the modern aesthetics and luxuries. The two-feet thick walls built using mud mixed with hay, roofs and the floors constructed from dark grey slate found locally and the doors, windows and furniture crafted using reclaimed wood from an old building are a testament to the owners’ commitment to promoting environmentally sustainable tourism. The attention to detail is noticeable everywhere: from the family copper ‘karahi’, round bottom pan used for frying, repurposed as a wash basin, woven baskets used as pendant lighting, locally sourced colorful rugs, beautiful handcrafted decorations in every room and earthern pottery dishes . No wonder it took them six years to complete just three cottages each consisting of two rooms! The lodge and the cottages are set in a beautiful garden surrounded by the lush green fields of tea bushes and soap nut trees. On a clear day, we could see the snow covered mountains of the mighty Dhauladhar range from everywhere in the lodge. 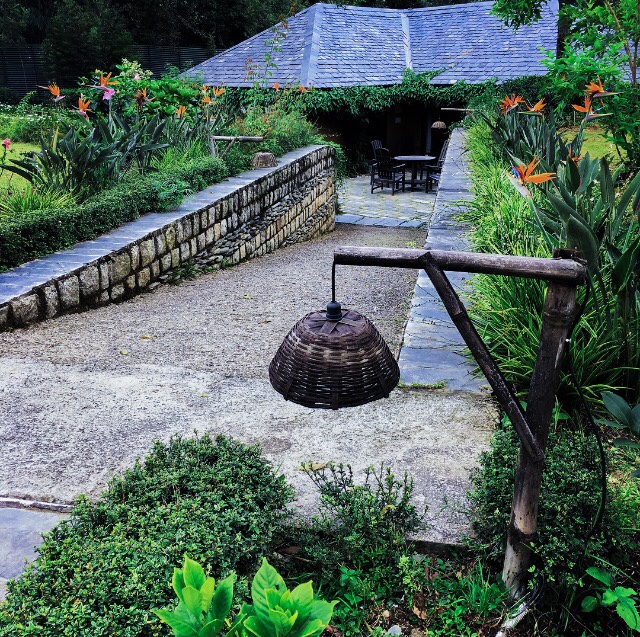 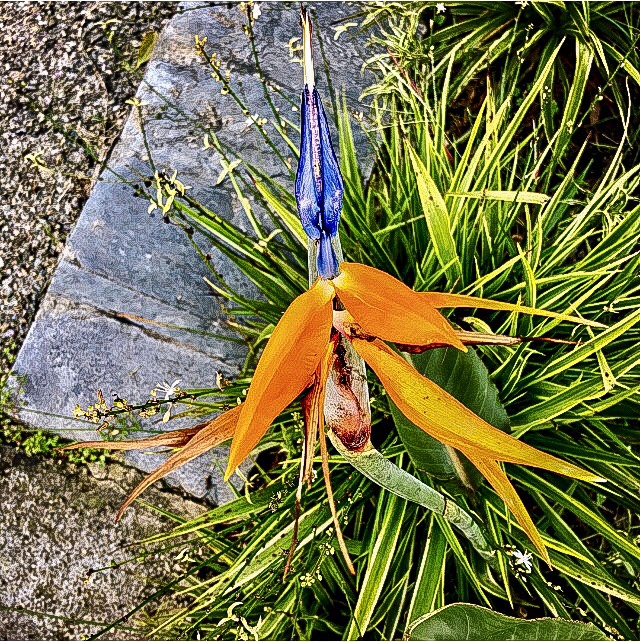 Bird of the paradise flowers growing in the garden 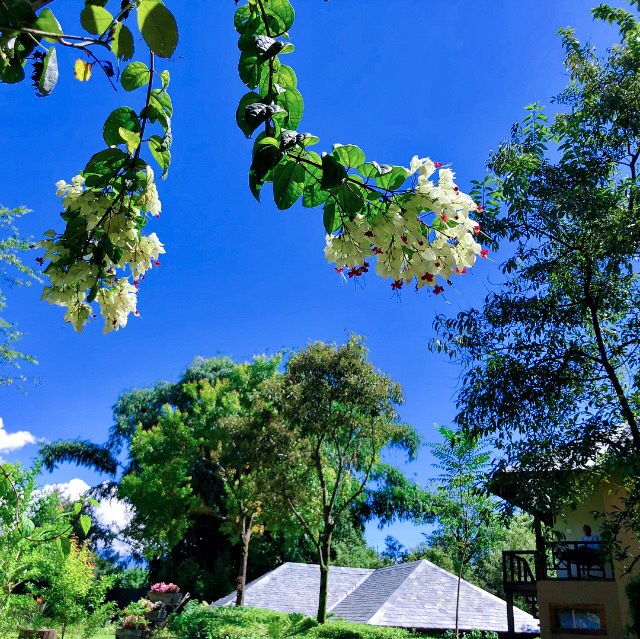 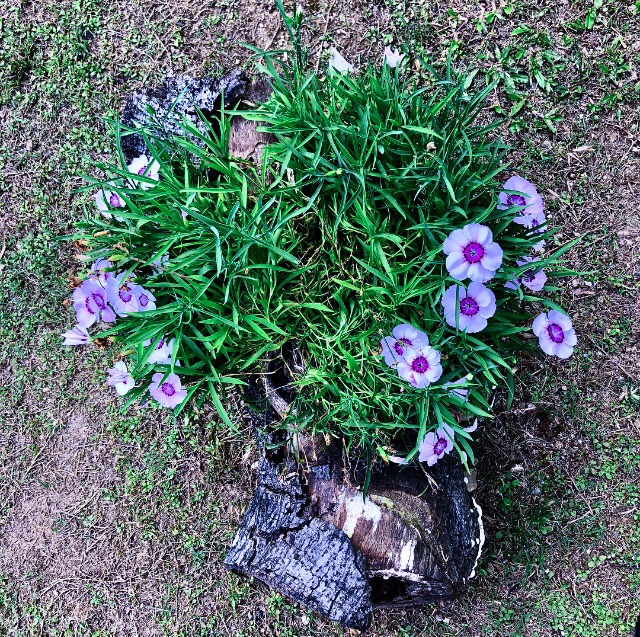 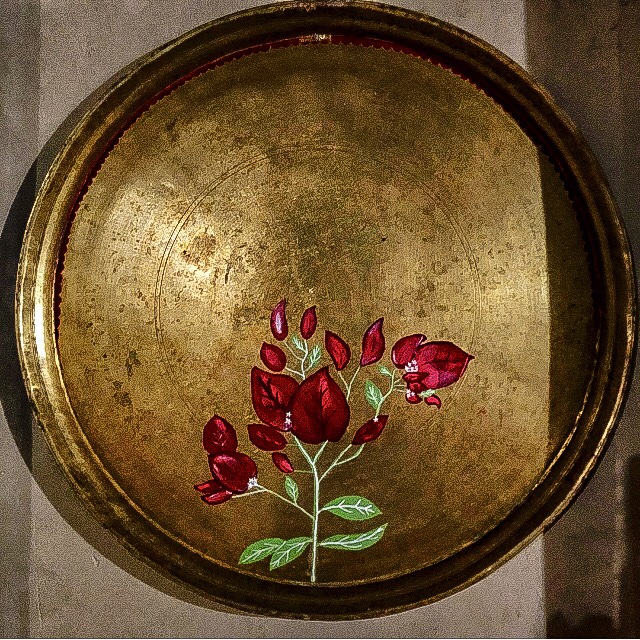 While the lodge is beautiful in itself and will hold its own against any luxury boutique resort in the world, what sets it apart is the warmth with which the owners Surya and Upasana treat every guest. Upasana is solemn and attentive whereas Surya is charming and friendly. They are wonderful hosts, personally seeing to all the needs of their guests and patiently answering all questions. And my dad likes asking questions! 😍 They have an uncanny sense of whether or not guests want their company and thus appear and disappear as if by magic! Moreover, the staff at the lodge is warm and friendly, the chef Pankaj who trained at a five-star hotel but has chosen to come back home to Himachal, loves cooking local fare. He made every dish that my mother remembered from her childhood. He made too many delicious dishes to recount them all here but I will share some of Pankaj’s recipes in the future blog posts. 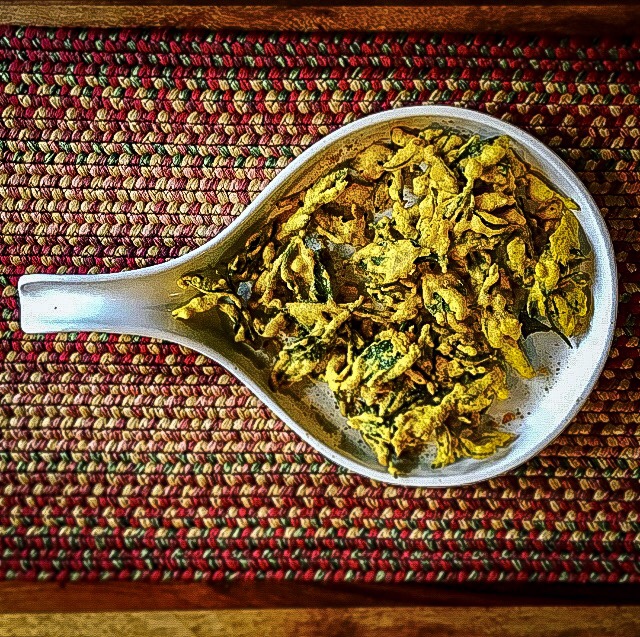 However, I have left the best for the last. The word ‘Wah’ in the retreat’s name refers to a region in Pakistan, the birthplace of the previous owner from whom Surya’s great-grandfather bought the tea estate. The word ‘Wah’ in Hindi also means ‘Wow’ or ‘Beatiful’. And it is beautiful! It’s over 500 acres of lush green haven and my family likes walking! We went walking in the tea gardens at all hours of the day, oohing and aahing over the vistas, clicking pictures at every corner and posing in every lane, watching tea-leaf pickers gently pluck the leaves which get converted into tea sold the world over. Even when it rained, we went walking with the umbrellas, we just couldn’t get enough of the tea gardens! The tea factory was working so Surya gave us a very informative tour with tea-tasting at the end. 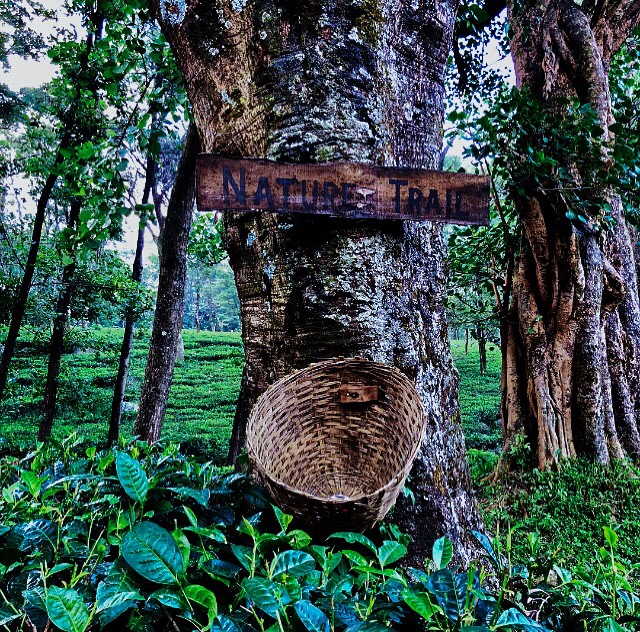 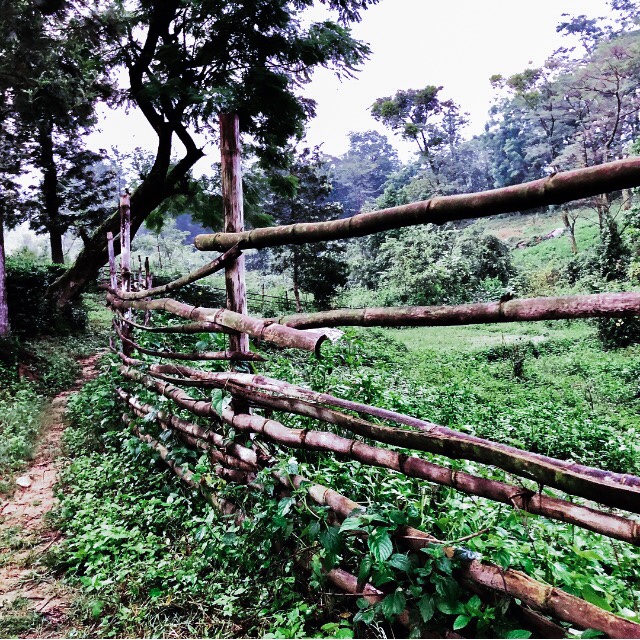 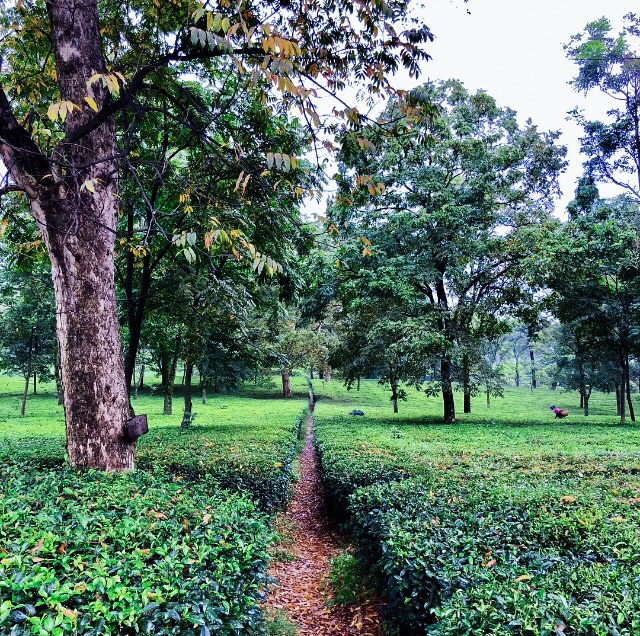 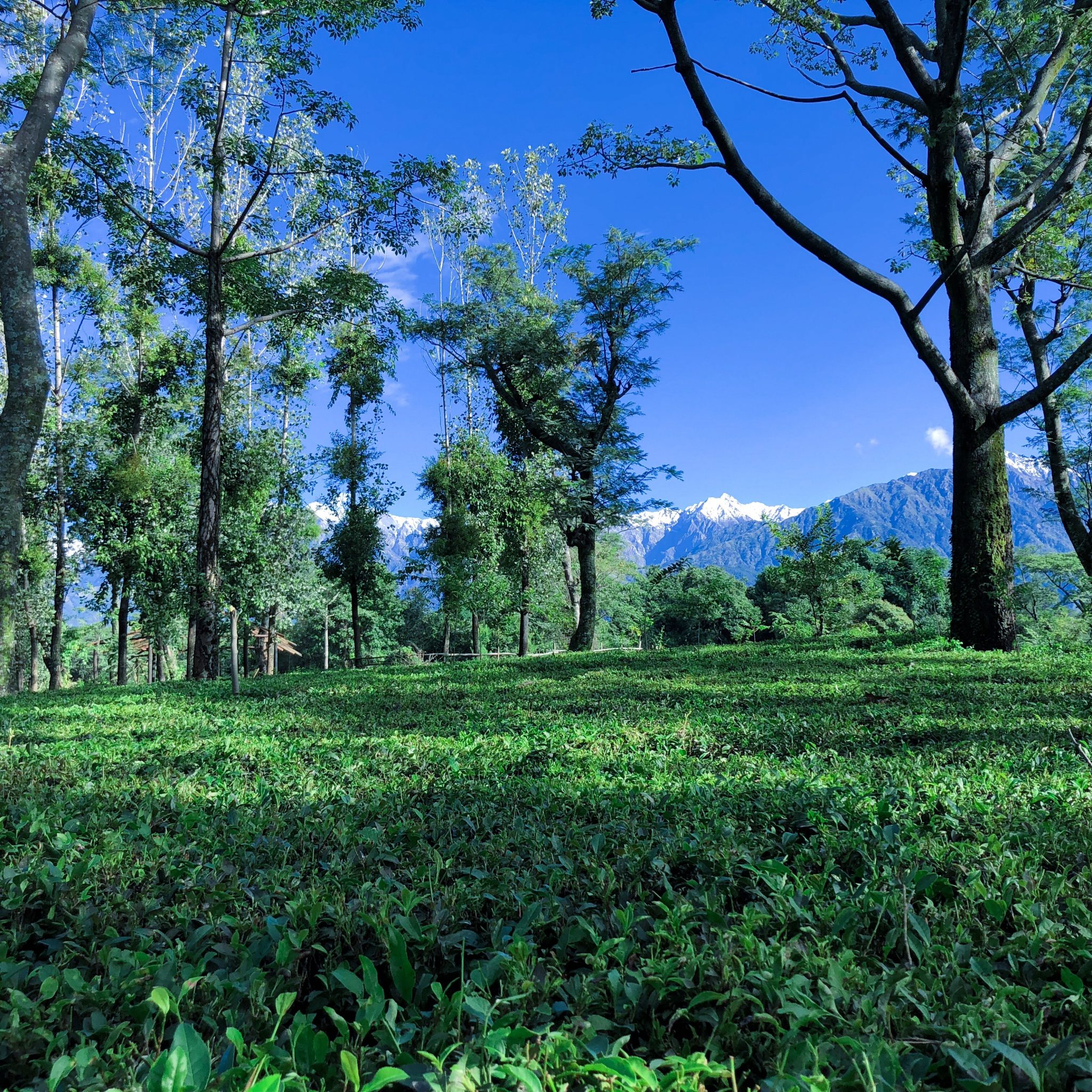 Since it rained quite heavily during our stay, we weren’t able to explore as much of the area as we wanted. We made day trips to McLeod Ganj, the home of the Dalai Lama and the Tibetan government in exile, the Norbulingka monastery in Dharmshala, which is trying to preserve Tibetan arts and culture and a trip to Bir and Billing, considered the paragliding capital of India.  The rainy weather meant that I couldn’t throw myself off the mountain!

Temple in the Norbulingka

Window in the Norbulingka monastery

We really wanted to stay longer in Kangra but real life called. We bid adieu to our hosts with promises to come back.

Tell us about your travel stories, of finding small hidden, gems that leave a impression.

One Reply to “Love Affair with Tea Gardens”