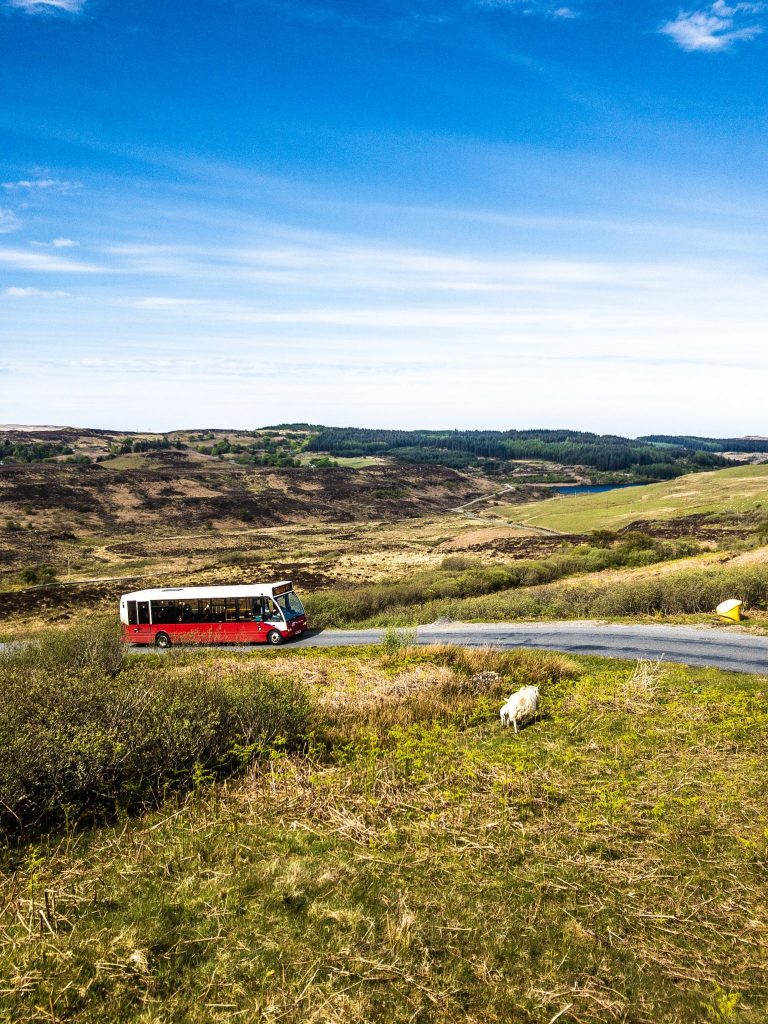 Kitty and I went to Isle of Skye in Scotland few years ago and we had such a brilliant time that we decided to do a “Year of Scotland”. However, due to unfortunate circumstances, we couldn’t embark on this adventure for a couple of years but this summer we were finally ready to launch our “Year of Scotland”. And what a fantastic start it was!

We picked the remote Isle of Mull for our first visit of the year. And it definitely is remote! And it seems even more remote if one has to wake up at an ungodly hour of 5am to catch the early morning train to Glasgow. I don’t know why I let Kitty talk me into such plans!

Kitty and I had to run to catch the train as we were late waking up and our uber driver couldn’t find us as we walked right past him! And then Kitty made me follow her with six bags, six bags(!) of luggage so that she can run ahead and collect our tickets. Anyways, we made it to the train with one minute to spare but without tickets (story for another time).

After a five-hour train journey, we reached Glasgow and then this followed: Went to the car hire>> Negotiated with the scummy car hire people >> Started driving >> Stopped few times to admire the Scottish landscapes & eat >> Reached Oban to catch the ferry to the Isle of Mull (but without tickets again; it’s our thing officially now)>> Drunk-on-petty-power, officious ferry staff made us wait in a standby lane>> Had to watch the two ferries leave with other people and their cars >> Kitty then ate a whole lot of chocolate, cakes and other stuff while muttering “I am bored, I am bored, I am bored”, like, thousand times as I was trying to catch a nap while waiting to see if we’ll get on the ferry that evening.

Ferry kerfuffle happened because Kitty always wants to do everything at the same time. Her secondary plan was to do a leisurely bike ride around Loch Lomond, a beautiful lake outside Glasgow, and then catch a later ferry from farther away. As you can see, that plan never panned out and we were left at the mercy of the drunk-on-petty-power ferry officials. But we were finally allowed on to the ferry! And after about an hour’s journey, we reached the Isle of Mull.

Our destination that day was a farm in  the Fionnphort settlement. The drive to Fionnphort reminded us why we wanted to do the ‘Year of Scotland’. The vast golden hills carpeted in myriad shades of green and the landscape dotted with the sparkling blue lakes made our spirits soars. The blue bells covering vast swathes of the hills and newly-born little lambs scampering in the fields made our hearts sing. 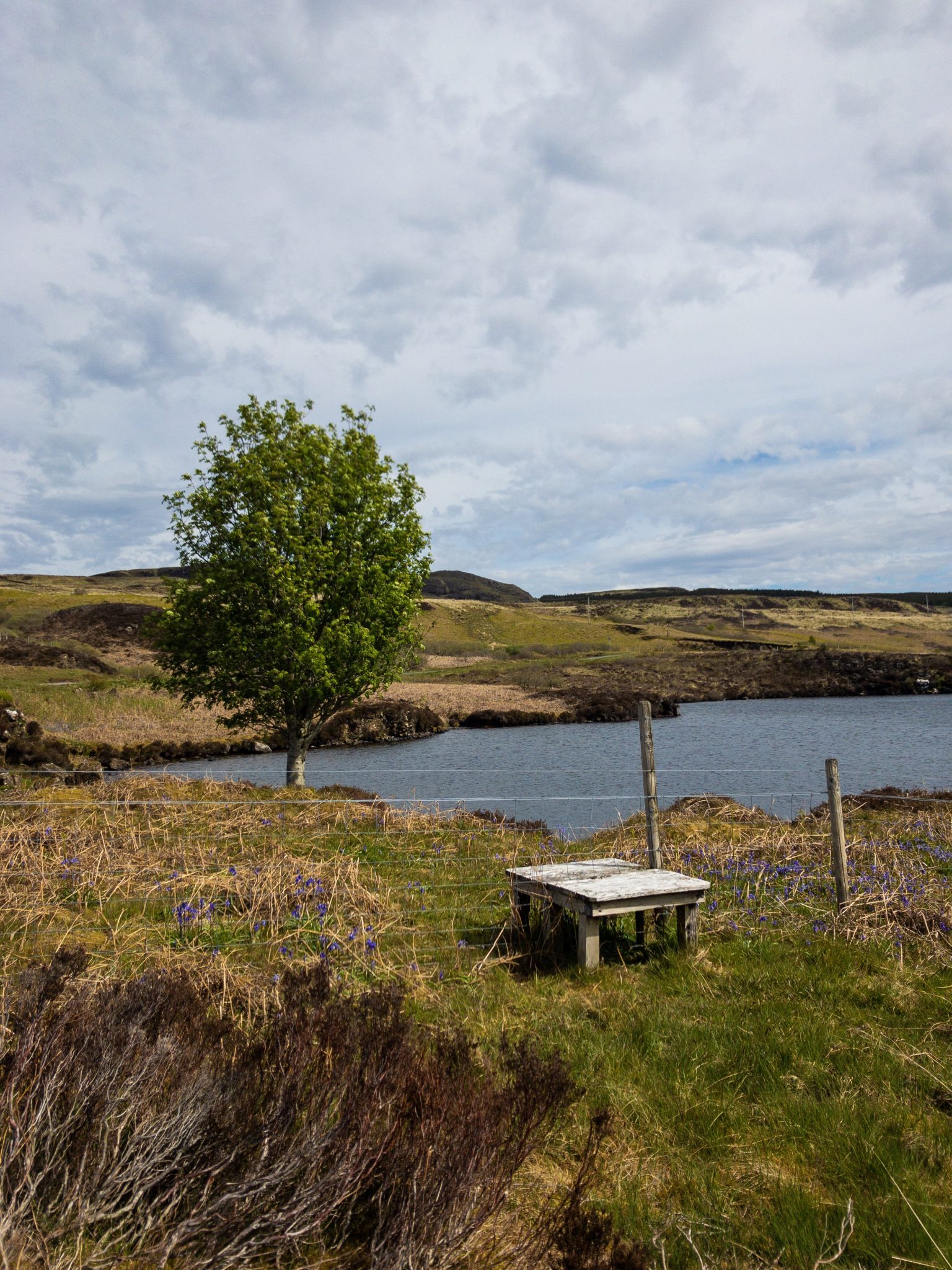 After reaching the farm, we had a quick dinner and settled for the night into our cosy little pod. I highly recommend these pods if you are in Fionnphort as the hosts have thought of everything. 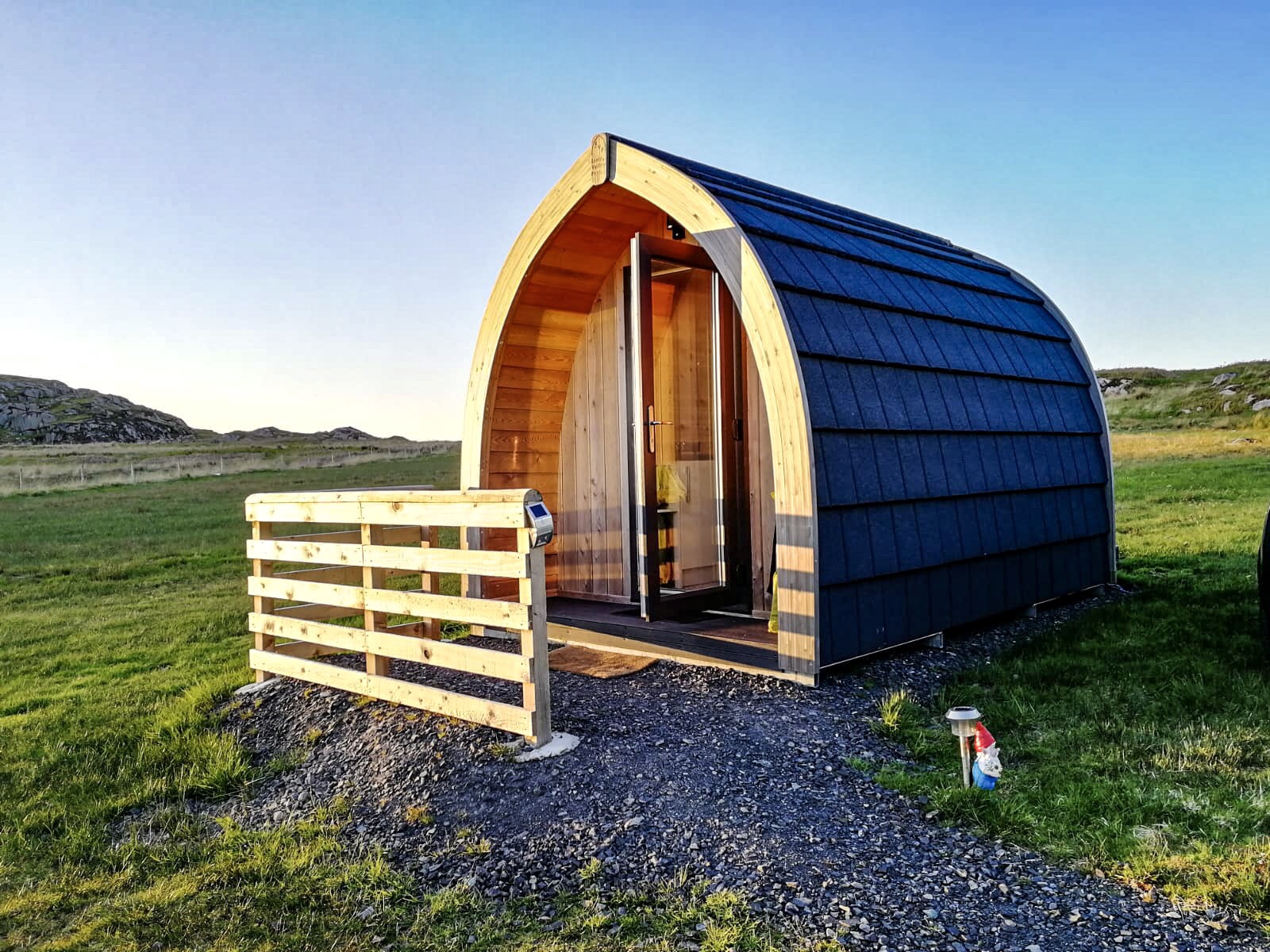 After a restful night, we took the  short ferry ride to  the Isle of Iona. It’s a small island with a total population of 107 but can trace it history back to thousands of years with a famous abbey holding central position in the island life and the wider Christian world for over a millennia.

As soon as we reached Iona, we knew that this was a  special place.  The azure blue sea and sandy white beaches welcomed us to the island. After pottering around in a charming gift shop, we started our exploration of the island. The cars are not allowed on the island but there is an option to rent bikes. However, it’s a small island so pretty easy to get everywhere on foot . Our first stop was the beautiful ruins of a medieval nunnery, the residence for nuns and single women from islands around Iona. There is not much left of the nunnery but apparently it was fairly influential in its time. 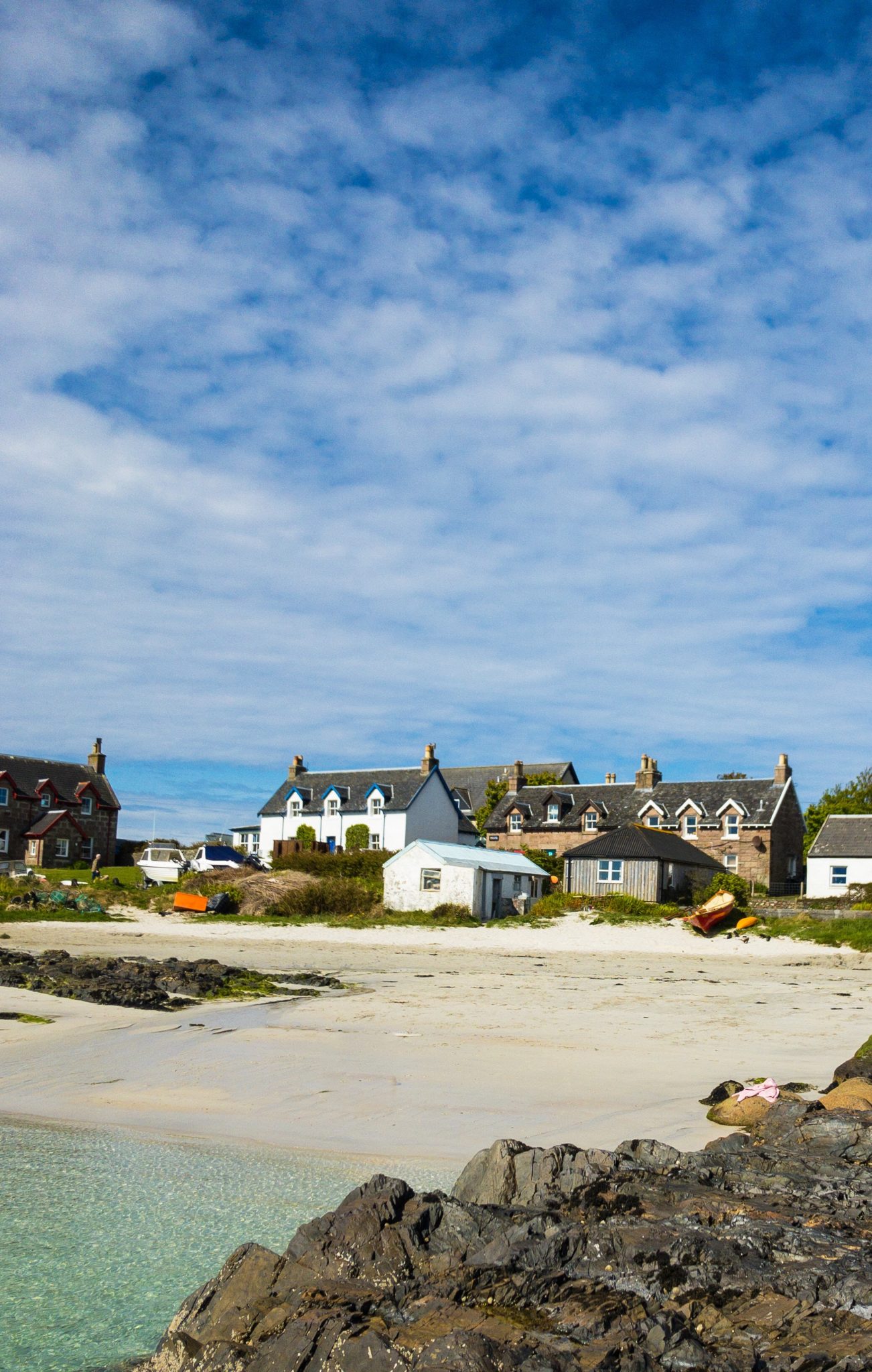 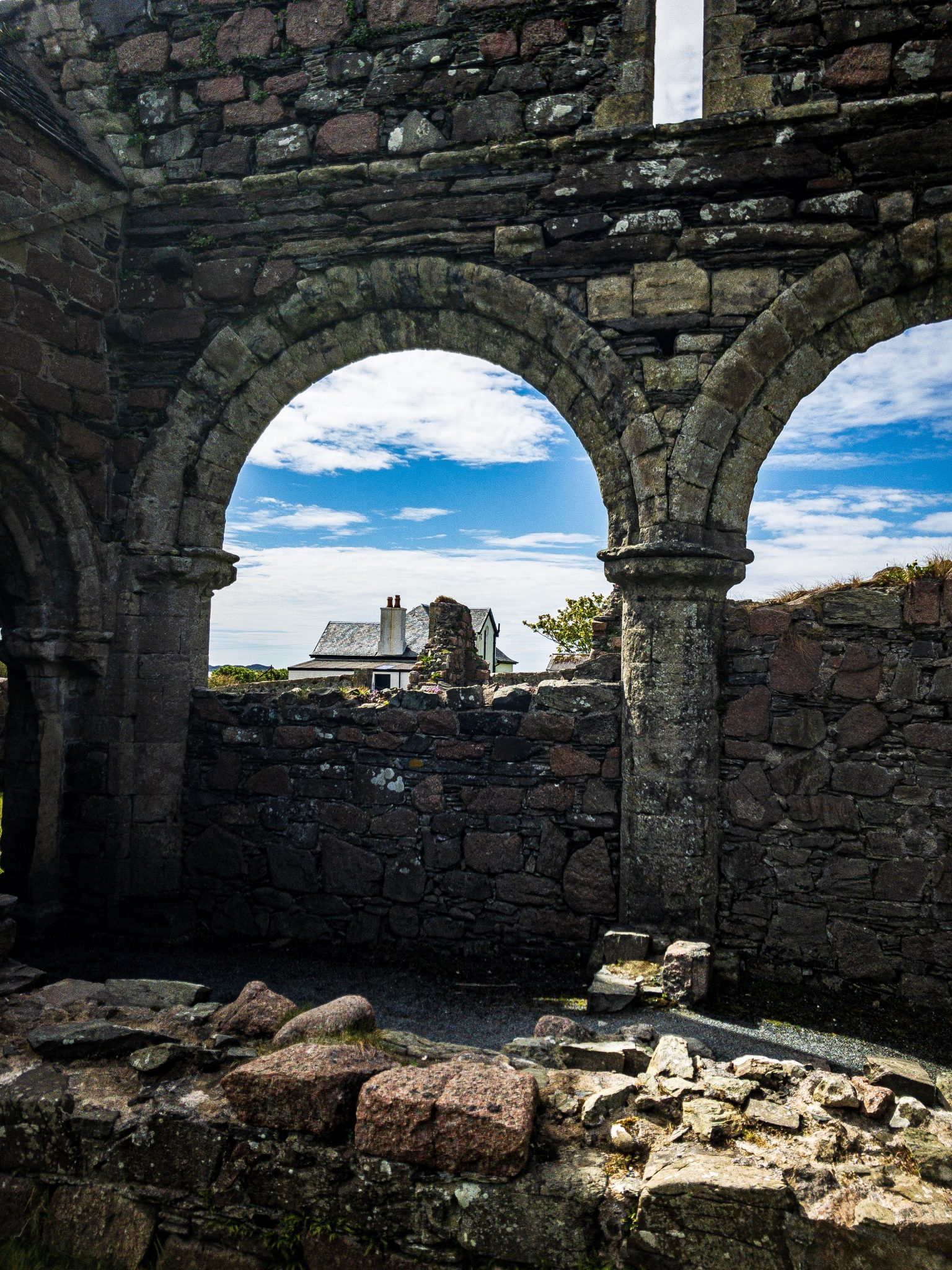 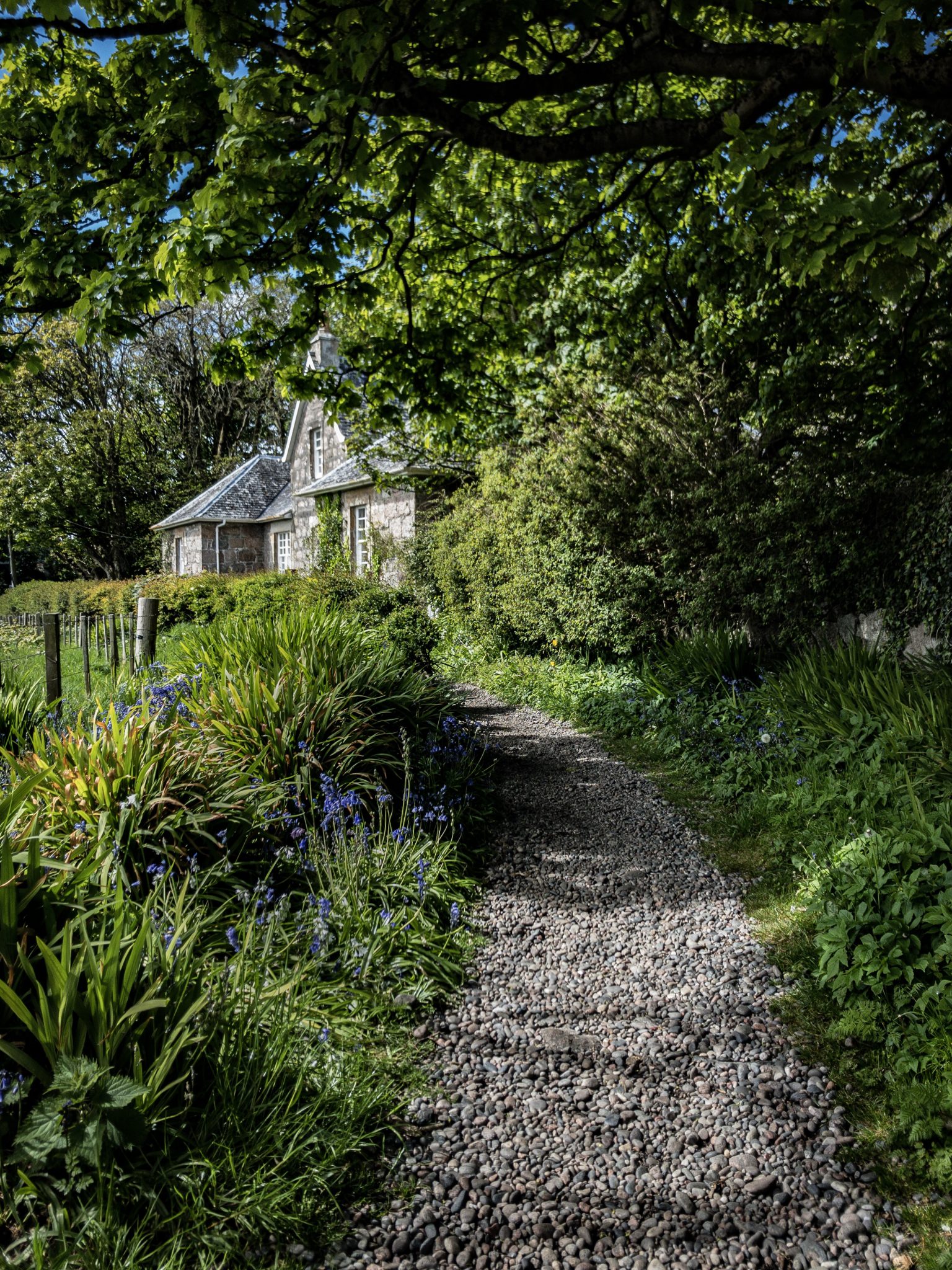 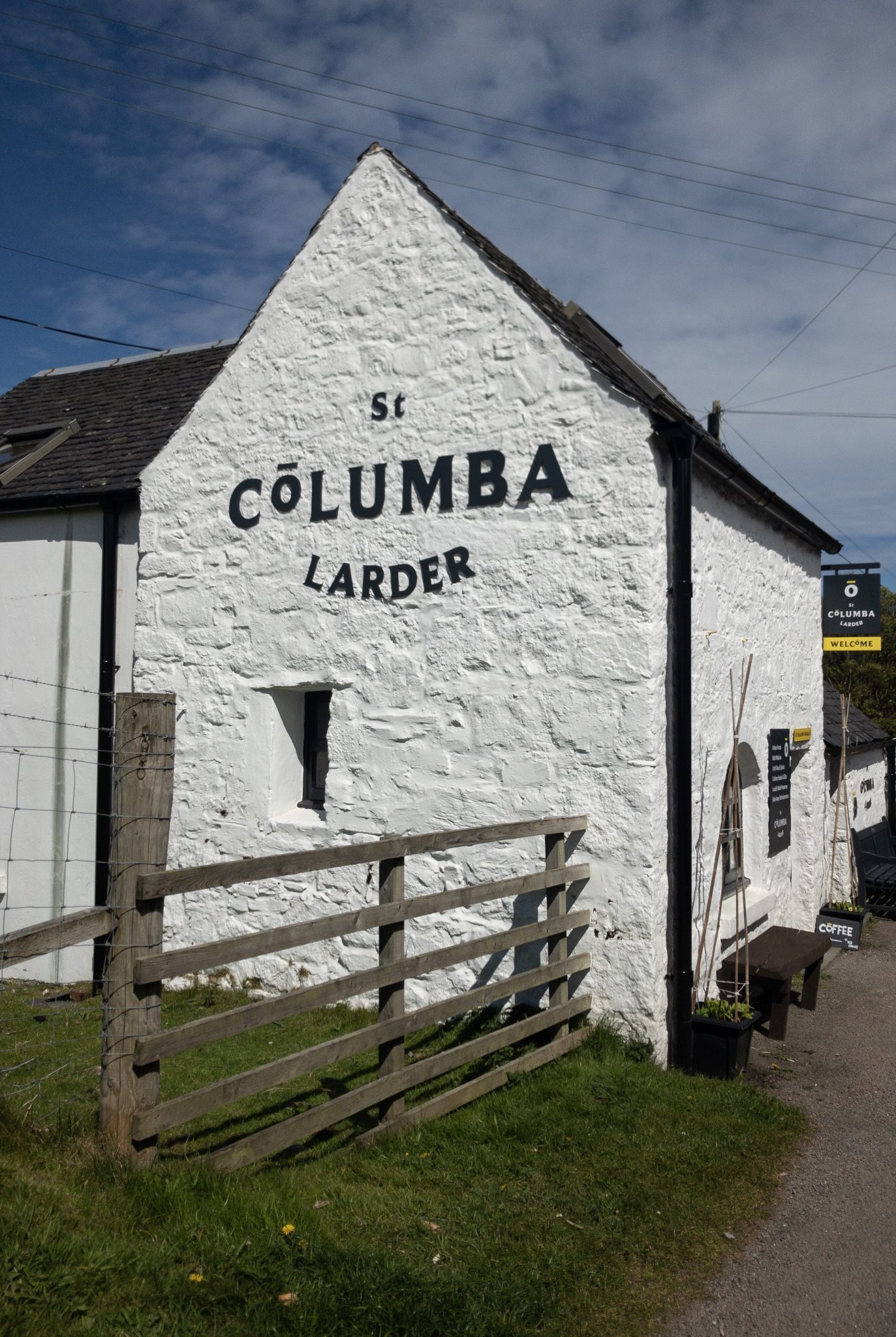 We slowly wound our way through the village and found our way to the abbey. We entered the abbey through a side gate and walked into a beautiful blue bells meadow surrounding one of the chapels. We lay around in the meadow for a bit listening to the bird song and inhaling the delicate scent of the blue bells while taking in the glorious views of the the abbey standing strong against the ocean and enjoying the feel of sun on our skin. We felt completely transported to another world. 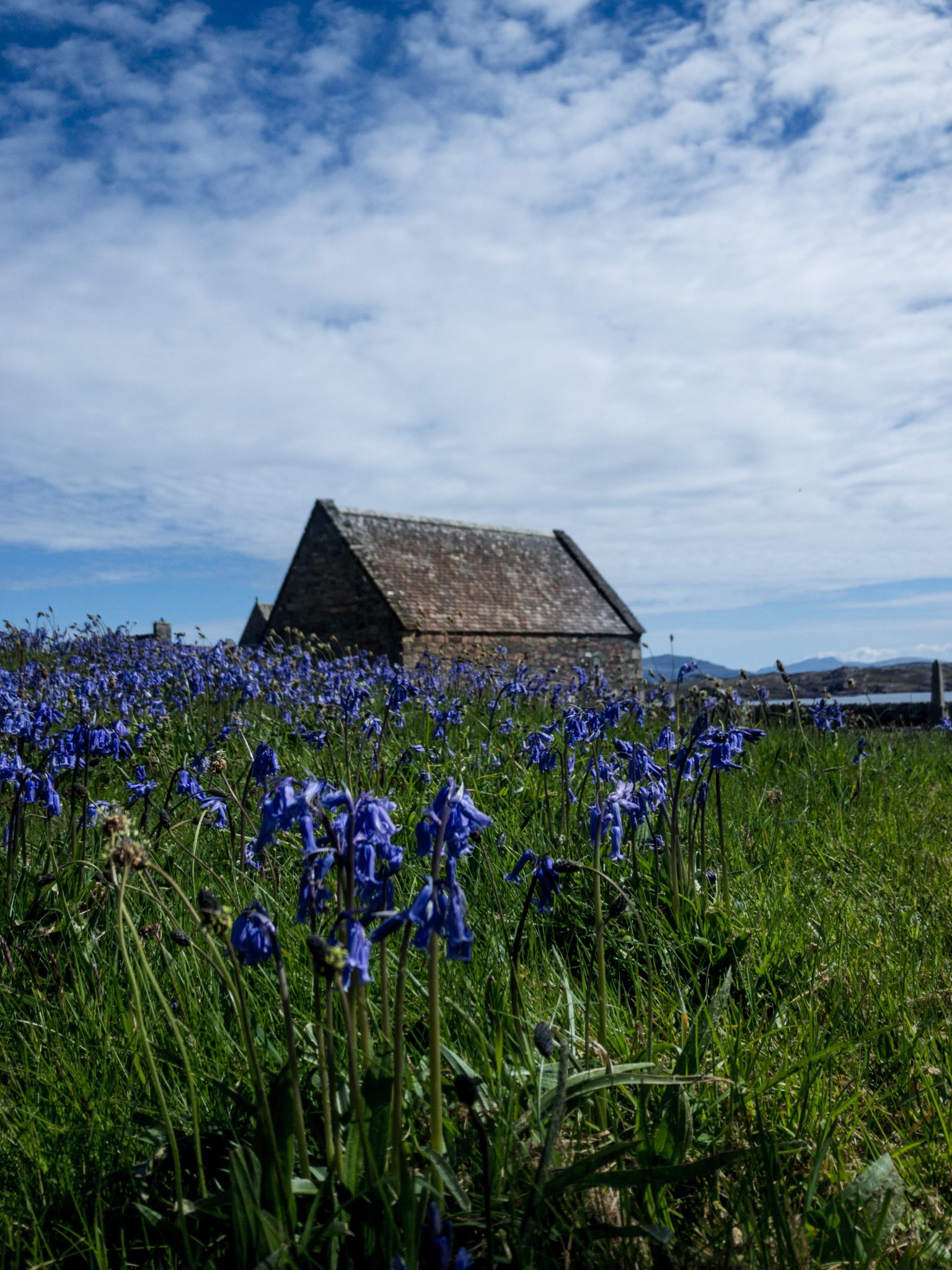 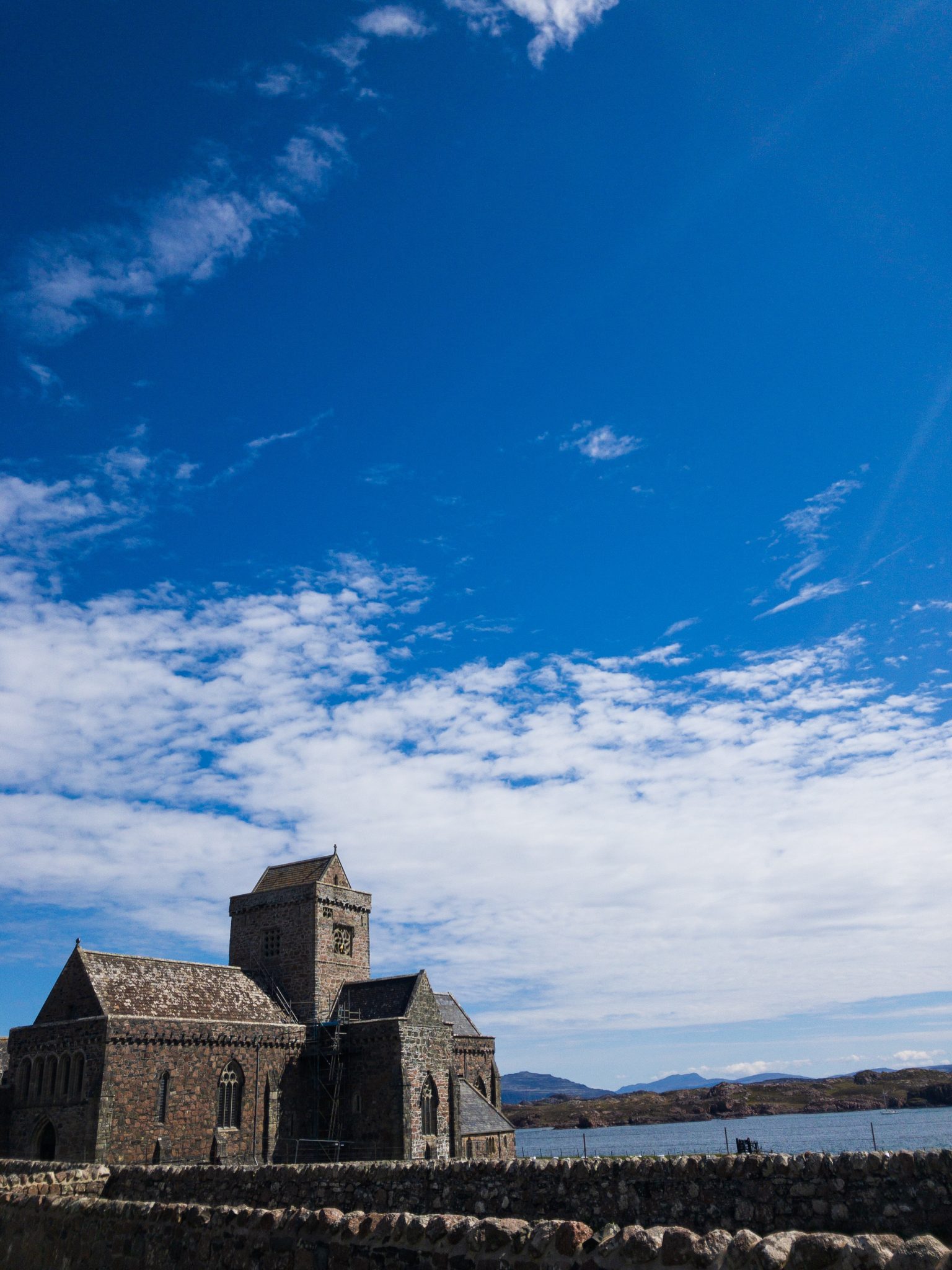 Iona might seem remote today but in the days before the modern transport, the various islands and coastal communities were connected by the waterways. It was probably easier to visit your friends on Iona from the mainland Scotland by a canoe than to take a horse cart across the hills to the next village.

The abbey in Iona was founded by St Columba who travelled from Ireland to Iona in 567AD. During its heyday, Iona was an important centre of learning and art and the focal point for the spread of Christianity in Scotland. The famous and the beautifully illustrated ‘Book of Kells’ is said to have been created in the abbey. The book is now in Ireland and is considered a national treasure. However, the riches of the abbey also attracted the Vikings, the warriors from Norway, Denmark and Sweden, who ransacked the abbey number of times over the centuries. 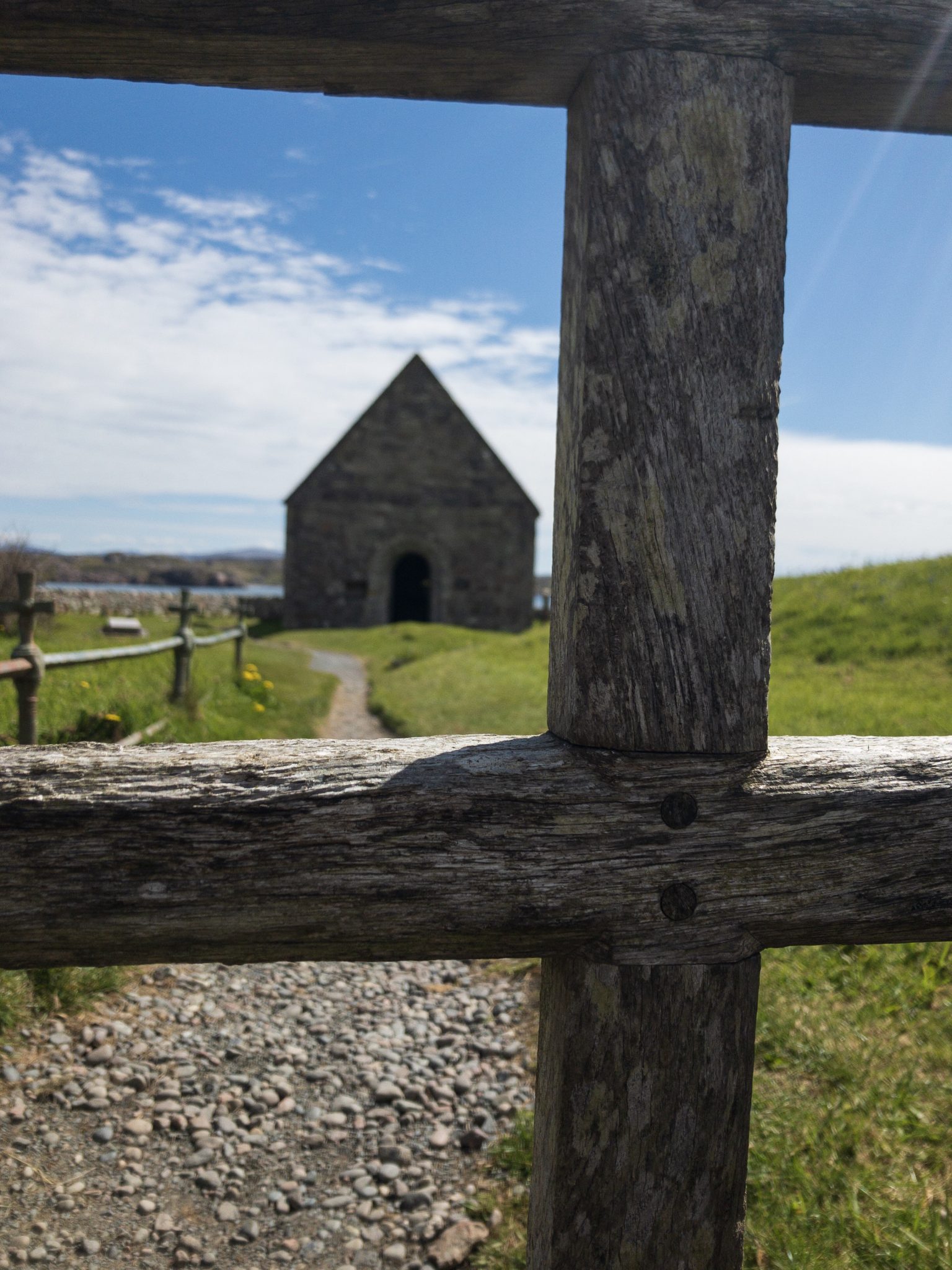 After visiting the abbey museum which houses the original cross and number of other artefacts, we set out for the beach. As we walked across the meadows and the farms, a little island bird accompanied us overhead singing its heart out! It suddenly dawned upon us that the only sounds we could hear were the birds tweeting and singing all around us, wind rustling through the meadows and waves lapping gently against the shore as there was no traffic on the island!

After couple of hours of lounging around on the pristine white beach, we decided to walk to the highest point on the island. The hike takes about 30 minutes from the bottom to the top. The views from the top are glorious with sea stretching to the miles on all sides. 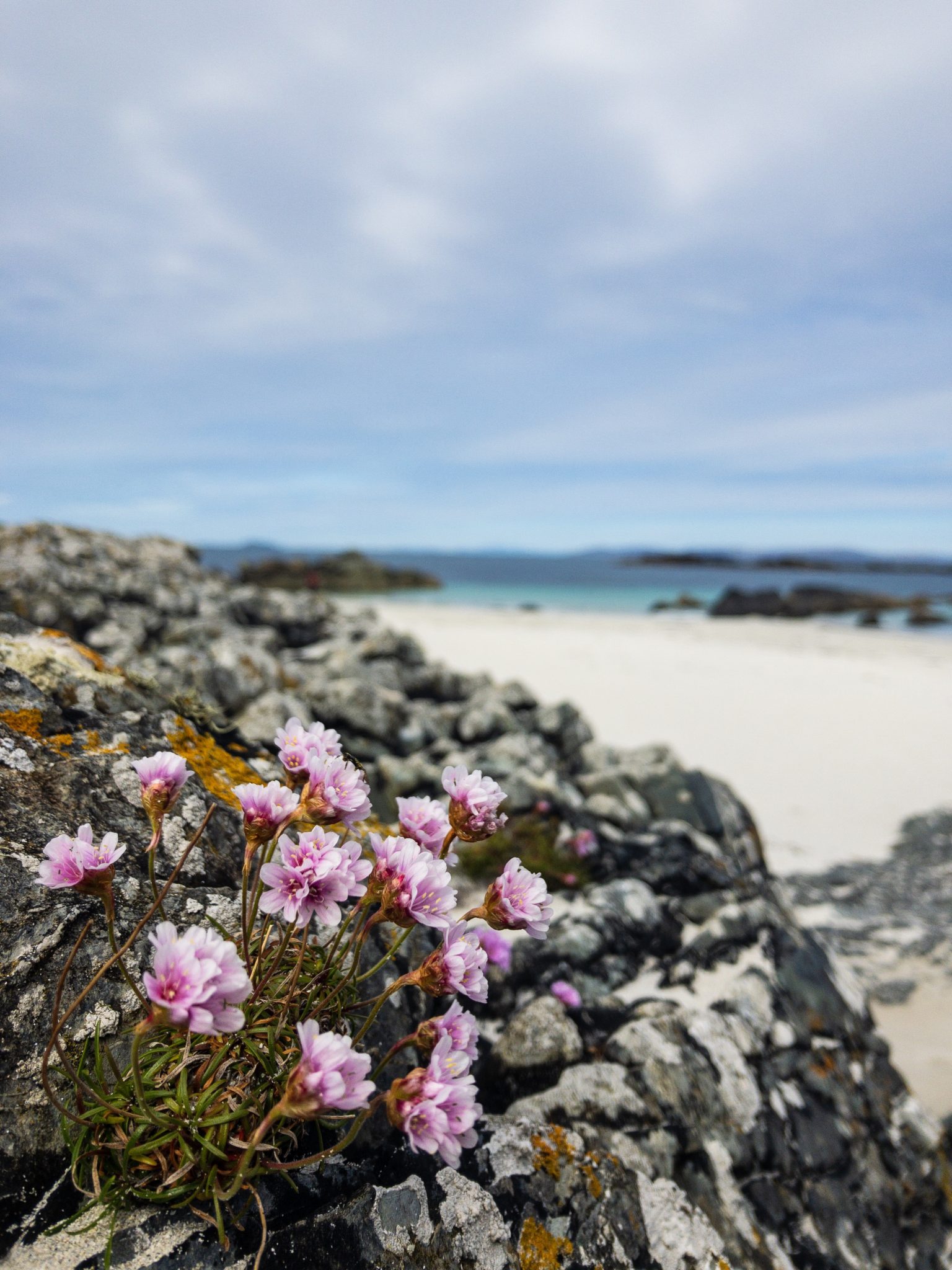 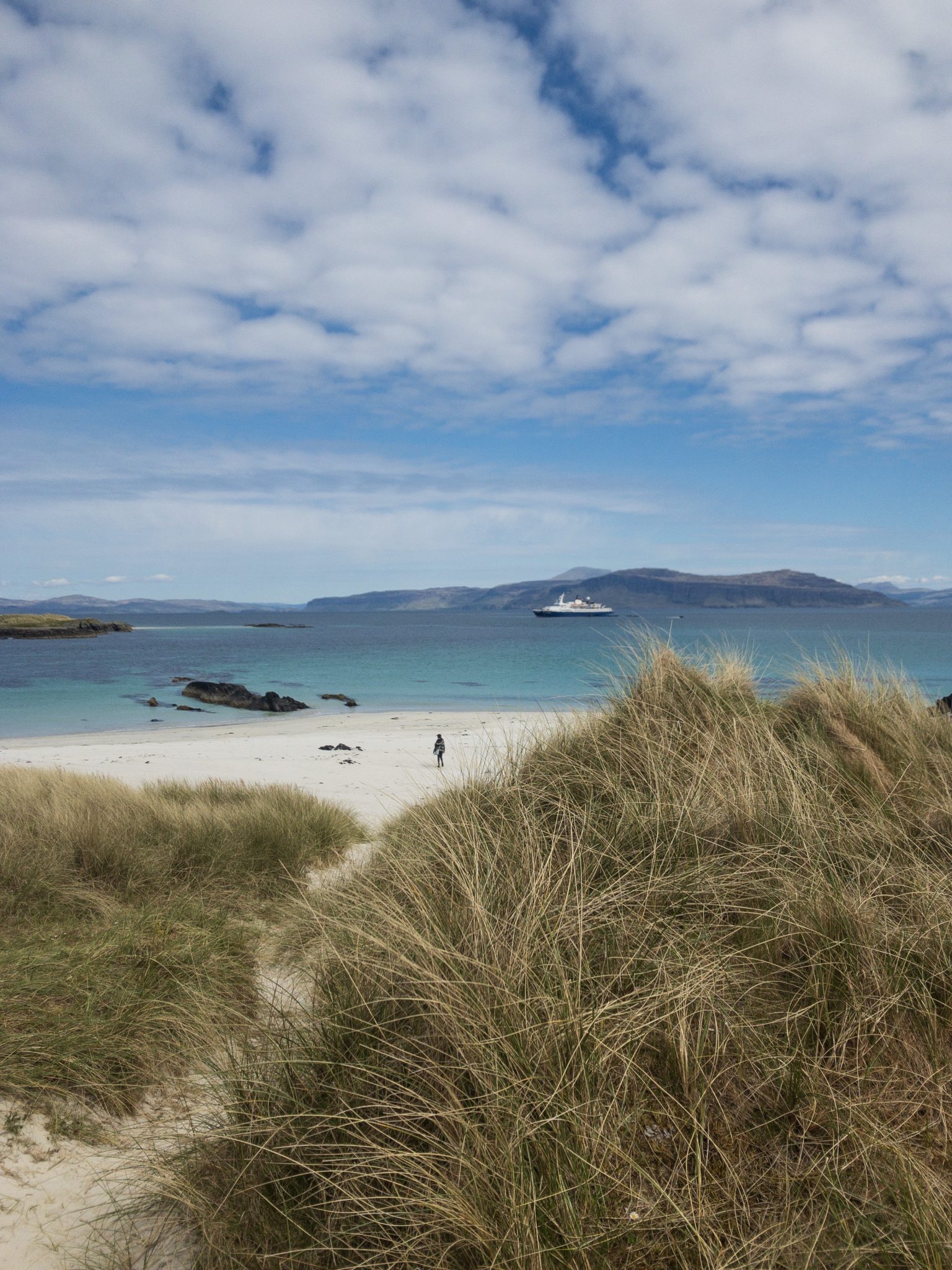 We took the last ferry back to the Isle of Mull completely in love with the island. Once on Mull, we started driving along the coast to reach Tobermory, the capital city of Isle of Mull, to spend the night.

Our destination the next day was the beautiful Calgary beach and the Isle of Staffa to see the puffins, the beautiful birds with large orange beaks, who nest in hundreds on the island cliffs from May till August each year.

After a quick tea in the morning, we set out for the Calgary beach with plans to stop for brunch somewhere along the way before catching the ferry to the Staffa. However, we kept on making stops along the way to take pictures or to do small walks. The scenery was breathtakingly beautiful, each vista more beautiful than the next, deep blue lakes and golden fields kept luring us to stop. 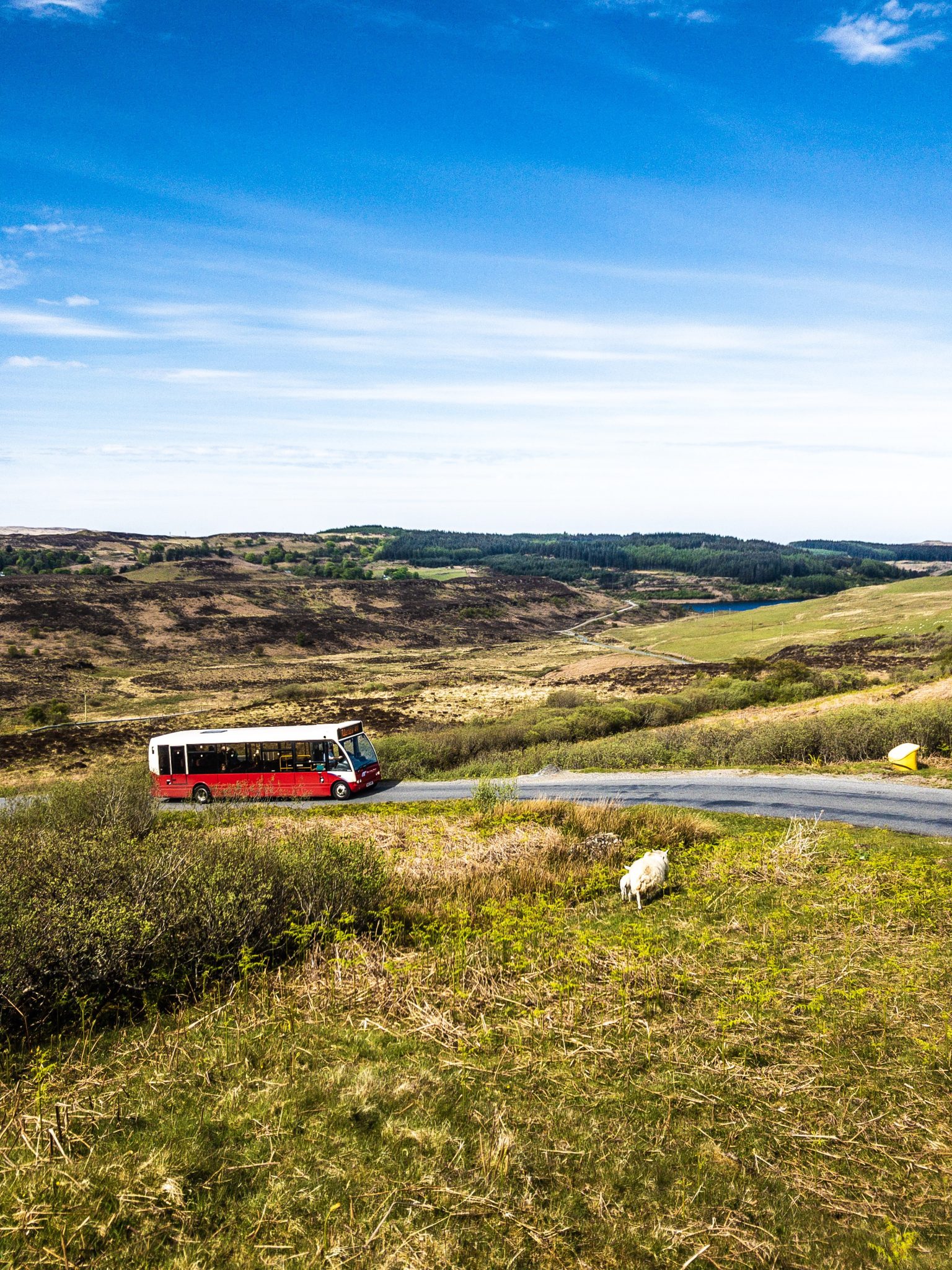 Calgary beach is exceedingly beautiful. Turns out that camping is free on the beach on a first-come-first serve basis! The white sandy beach surrounded by mountains on three sides and the blue-green ocean on the other side makes for a stunning campsite. 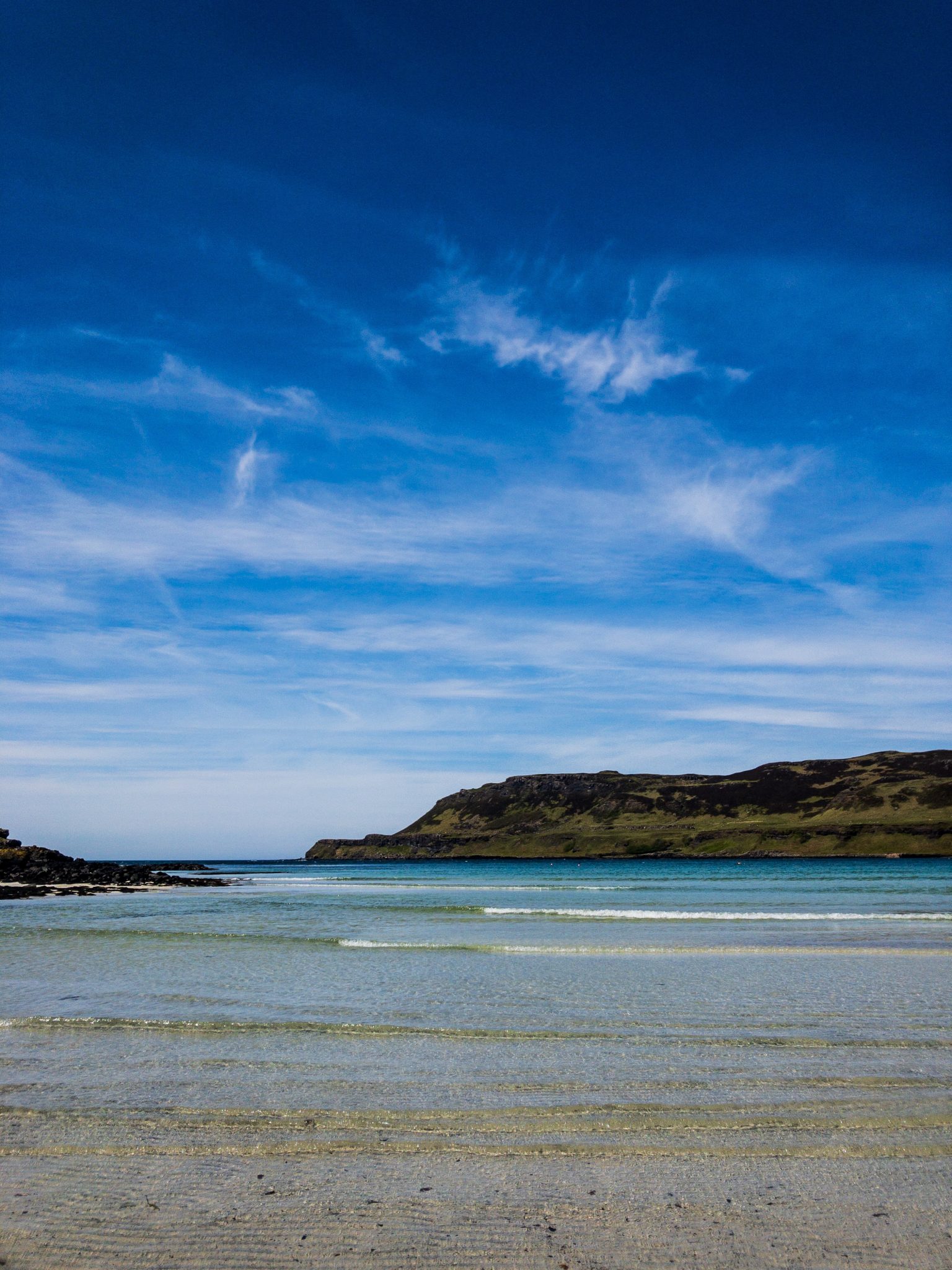 We couldn’t stay for as long as we were running late for the ferry to the Staffa (yes, we are always running to catch things!). We decided to catch a bite to eat in the ferry rather than stop and eat on the way. We reached the ferry terminal just in time. However, the ferry turned out be a small motor boat with no food onboard! Now it was a choice between going hungry for the rest of the day or seeing Puffins. I definitely was leaning towards food and a hike on Mull as I had only a cup of tea and one biscuit since morning but Kitty really, really wanted to see the puffins. I relented but I was so hungry! My hunger pangs got the better of me and I asked the van driver who had come to drop off other ferry passengers if he had any food. Then I asked the girl who sold tickets on the boat if she had anything to eat. The girl had a half-eaten pack of biscuits and the van driver had some sausages. Mind you, I wasn’t begging, just asking. I offered to pay but both of them politely declined. Kitty and I quickly stuffed ourselves on the scrounged food and freeish coffee on the boat while still eyeing the sandwiches that another couple was eating! As soon as we finished eating, we realised that it was a big mistake to have eaten so quickly! The ocean was rough and the boat was going fast, like real fast. After battling seasickness for over an hour, we finally reached Staffa.

While Staffa is famous for the puffins, it first came to prominence due to Finagle cave, a dramatic cave made entirely out of hexagonal basalt stone columns, occupying the North side of the island. 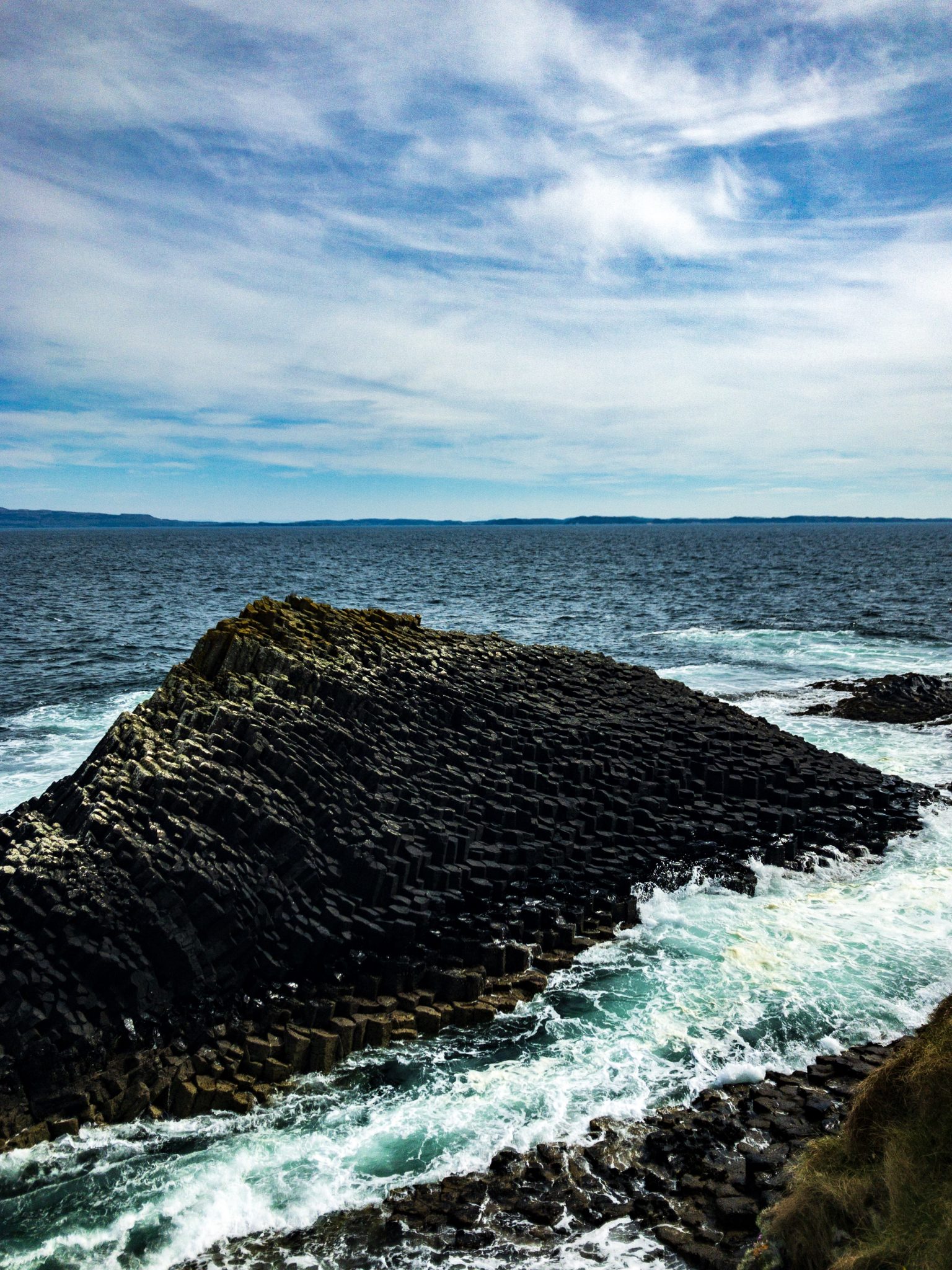 After landing on the island, we went walking in search of the puffins. When we got to the cliff face where puffins nested, there wasn’t a single puffin to be seen anywhere. Someone pointed out to where hundreds of puffins were swimming in the ocean after a raven scared them off the cliff.

We sat there hoping that the puffins will fly back before we had to leave the island. The island is uninhabited so there was no option to stay overnight. However, even without the puffins, the island was spectacular so we settled in to enjoy the scenery. The beautiful clear skies, blue sea extending forever and bluebells growing all around us made for a very special viewing platform even if the performers i.e. the puffins were missing.

As we waited patiently, the one puffin flew over, about one feet from where we were sitting, then a second puffin joined it and soon a whole load of them flew in and then the little pufflings started to come out of the nests in the ground. It was a glorious sight! Kitty was so moved that she had tears in her eyes.  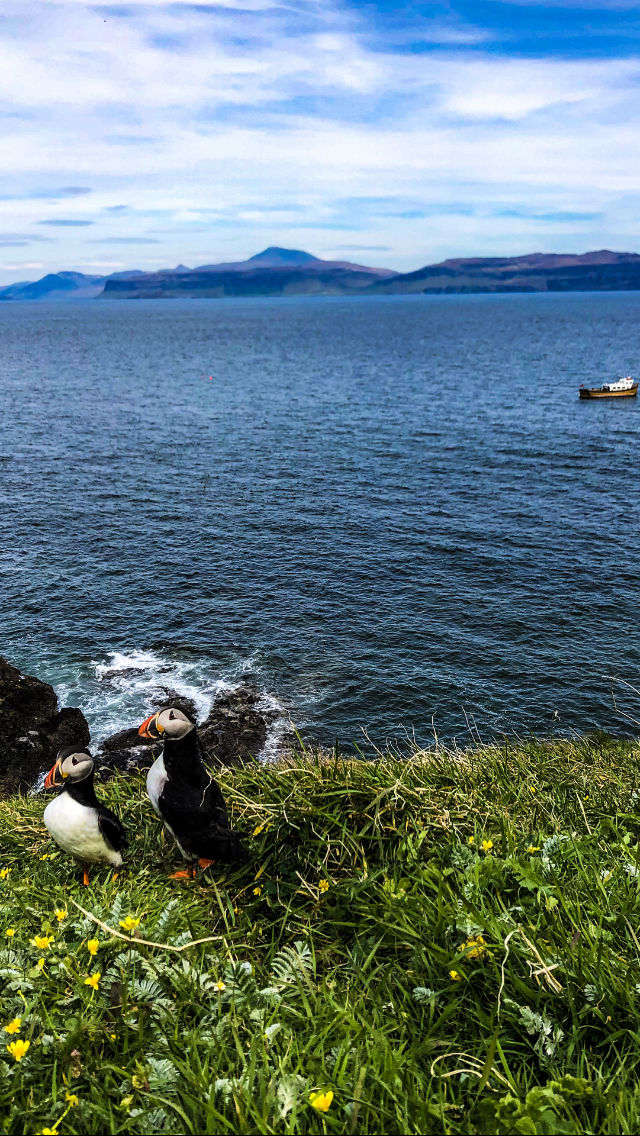 But soon it was time for us to head back to Mull but we felt overjoyed and strangely content at having experienced such wonder.

On the ferry back to Mull, we pondered over the sights we had seen and made plans to return for a longer trip to the region. We felt confident that we will come back as the Ionians have a saying that anyone who visits Iona comes back to the island three times during their lifetime. The tantalising promise that we’ll back made the thought of return journey to London little easier to bear… we’ll be back soon! 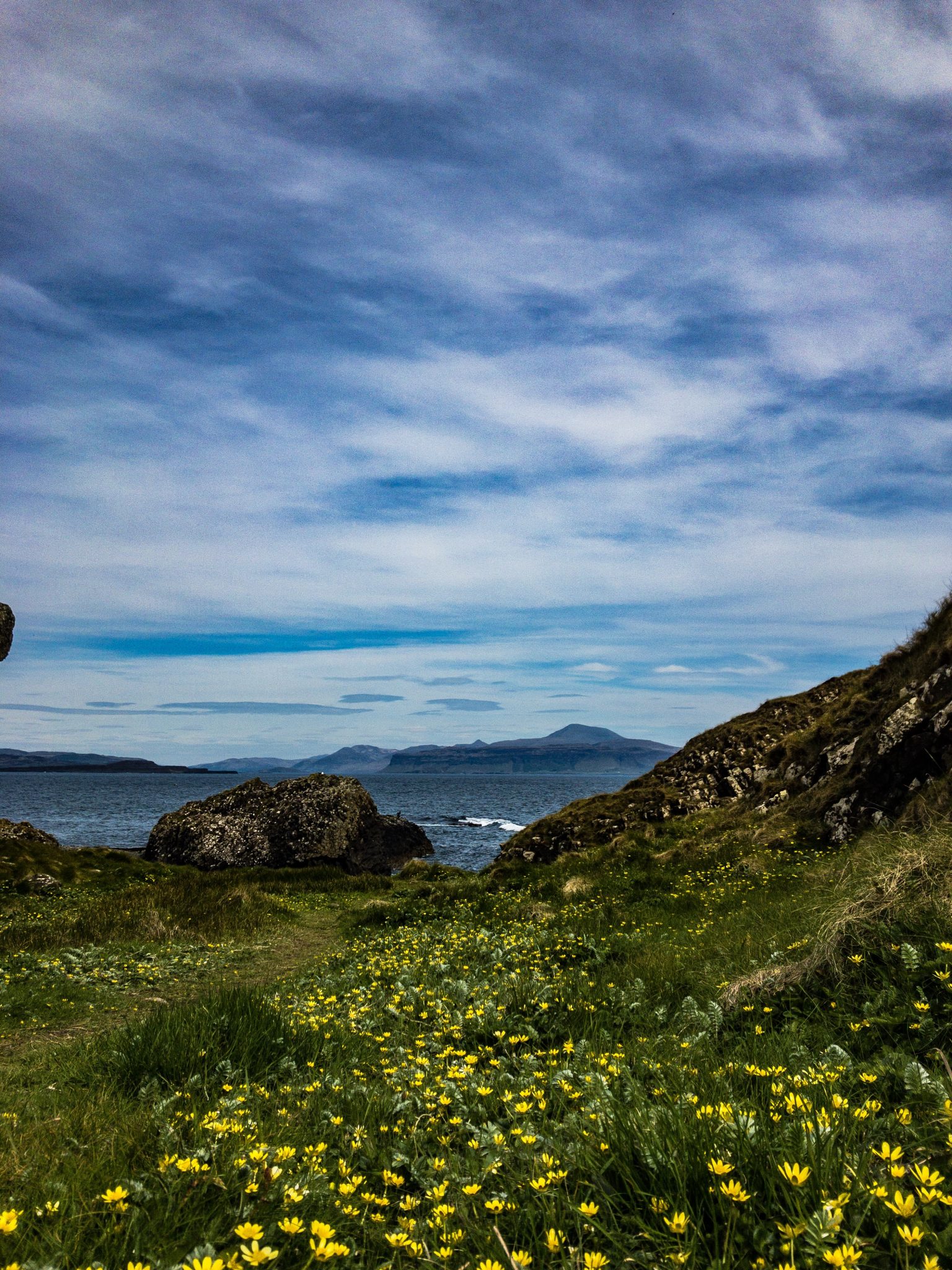 If you are looking for more travel ideas in UK, please read about my trip to the beautiful South Devon.